Last Friday I finally hit the big 4-0. With my birthday being in August, I was one of the youngest in my grade. It was a real pain when I was 15 and waiting all summer to get my driver's license while my friends were driving around and having a great time. I thought it was so unfair!
Well, the thought of turning 40 has sunk in over the past year when a lot of my friends hit that monumental mark. I haven't thought much about it. No deep ponderings about the meaning of life. Or seeing if I'm measuring up. Or wondering if life has passed me by. 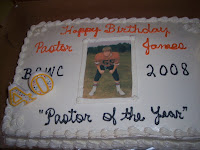 However - it seemed that my turning 40 was a big deal to several other folks. The crowd at church threw me a surprise party Sunday afternoon. It was pretty cool how they did it. I had a meeting at the fellowship hall, and everyone showed up at the end of it. They brought in all kinds of snacks, a huge cake - with my 7th grade football picture on it, balloons and the like. I was like - wow! It did seem that most of those that organized the party were over 40, so it could have been a 'welcome to the club' kind of thing :)
The funniest thing was the shirt that they gave me. They congratulated me for being named pastor of the year for our church district. Then gave me a shirt with the letters POTY large on the front and small letters underneath saying 'pastor of the year'. That was cool! Several call me 'poty' now.
My sister got involved and made a slideshow of all kinds of pictures of me from age 1 to 40. Most of them were not very flattering. Most people were laughing pretty good. I imagine she worked real hard on it, and probably had a few laughs putting it together. It's a shame that she wasn't there to see everyone enjoying it. Maybe I'll post it sometime. (She needs to remember that she is older and reaches any BIG number before I do.) 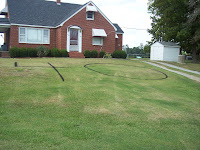 To top it off - when I got home from the surprise party - a big 40 was painted on the grass in our front yard. Unless the grass really begins to grow, it may be there until spring.
It was great time - thanks to all who made it special!
Posted by James Spaugh at 9:40 PM