My boys have been away for 11 days, the longest time I haven't been with them. They left with Amy and Katherine to see some family, then went to camp. After camp, they went to Amy's brother's for a few days. I'm looking forward to their return.
While they have been away, we've gotten a little preview for what life may be like after they leave home. Katherine has been my big helper, and we've been able to do a lot of fun things together. I realize that the boys do a lot around the house (chores) that makes life easier. I mowed the yard twice while they were gone, my first two times of the summer. Hopefully, it will be my last two times this year. The benefits of having two teenage boys.
Most of all, I missed being with them, knowing what's been going on in their lives. I look forward to them telling of their adventures.
Posted by James Spaugh at 9:03 AM No comments:

This week our boys have gone to camp for the week. Camp has been one of the summer highlights for our kids since they can remember. Our kids have been going to camp since 1997. Kendall was 4 and Kaleb was 3. Our first camp was a family camp - and our kids have been at camp at least one week a year ever since. For several years, they spent two weeks at camp since I worked at the children's camps.
Since the boys are at camp,  I'm home with the girls. It's one of the few times that I've been out-numbered. That's key when it comes to what is being watched on the TV in the living room (that has the DVR).
The cool thing is that Katherine has been my sidekick yesterday and today. We've had a great time together. We went to the Y both days - today at 5:30 am - and then to Muddy's for a mocha (for me) and a Holy Cow (for her). Great times!
Posted by James Spaugh at 3:25 PM No comments:

Last Thursday, Kaleb finished up the driving part of Driver's Ed around 12:15 pm. By 1:15 he had passed his Driver's Ed exam, had his picture taken and was waiting for his learner's permit to be made.
He proceeded to drive me back to Hertford. Then he drove us out to eat that night. Kinda weird. Even with Kendall driving, it is still my habit to go to the driver's door when going somewhere. I guess it is time to kick the habit for a while.  BTW, Kaleb does rather well. My only complaint, sometimes he goes too slow. (I know that will change.)
Posted by James Spaugh at 3:12 PM No comments: 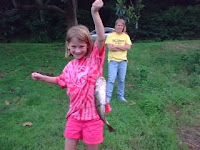 The kids and I went fishing this evening at a little pond near our house. We've fished there many times, but with little success. This evening was different.
Katherine had caught two fish, and Kendall one, before I ever got my pole in the water. We ended up catching over twenty fish in a short period of time. We  started off catching catfish and finished by catching mostly bream. Katherine caught two rather large catfish, requiring her brothers to help her haul them in. Kendall is now the family expert on getting catfish off the hook.
The weather was perfect. A little overcast with enough breeze to keep the insects away. What an enjoyable evening!
Posted by James Spaugh at 9:06 PM 2 comments:

There have been some big days lately for my family and our church.
Our oldest son, Kendall, flew out to Colorado Springs last week for Summer Seminars at the Air Force Academy. He seemed to have had a good time even though it was quite strenuous physically. Most importantly for mom and dad, he made it back.
Our church had a huge Sunday. We made faith (financial) commitments for a new facility. Our pledges exceeded our goals. We also received an initial offering toward that facility. That offering was more than our total offerings during my first year at the church. The phase I kept saying on Sunday was "I can't believe this!" Wow!
Finally, we travel to Durham today for my niece's graduation from high school. I know I sound old, but I remember vividly the day she was born. She is the first of 6 grandchildren to graduate. She begins four straight years of high school graduations for the grand kids. If the kids get through college in four years, my parents could be going to a graduation each year for the next 10 years. Wow.
Posted by James Spaugh at 7:30 AM No comments: 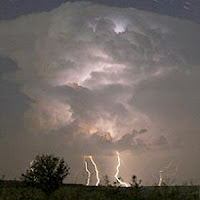 This evening we had our first thunderstorm of the summer. I know that it is technically not summer, but this evening we had one of those storms.
This evening it reminded me of a snow storm. Not in what we saw, but the effect that it had on us. We were in awe of the weather happening around us. It was a little scary, but beautiful as well. Once the thunder passed, the rain kept coming down, and it seemed peaceful.
We didn't lose power, but we did lose the Directv for a while. So, we watched it rain. I don't know, but it seems that in storms we (at least I) tend to reconnect with nature (God). I think that it is true with the storms of life as well.
I want to live life in awe of God, not having to rely on storms to get my attention. Lord, help me see your wonders in everyday life.
Posted by James Spaugh at 8:15 PM No comments:

This year Amy and I have been listening to the Daily Audio Bible podcast each and every day. We're listening through the Bible in a year. I have really enjoyed hearing the Word. Today we started in on Acts and are in the middle of 2 Samuel in the OT.
Sometimes we listen together on the way to the YMCA for our early morning workout, and on days we don't ride together we listen separately.
This morning we were listening on our way home from taking Kendall to the airport and I was excited because we were in the middle of the exploits of David in 2 Samuel. I love the action and adventure. I was just about to share those thoughts with Amy when she said, "I've had a hard time following what's happening in 2 Samuel." What?
I guess that is one of the ways that we are made different. It is why I have to tell her what I'm thinking instead of assuming she knows. Also, I need to remember everyone doesn't think like I do. (However, the world would be a better place . . . )
So, whatever you think of this post, someone else probably has the exact opposite opinion.
Posted by James Spaugh at 2:42 PM No comments:

A Big Day as Parents

Wednesday will be a big day for Amy and I as parents. It will be even a bigger day for our son, Kendall.
Kendall will catch a flight in Norfolk, fly to Dallas, and then fly on to Colorado Springs. He will be participating in one of three Summer Seminars at the Air Force Academy.
So, several 'firsts' will be happening for both parents and son over the next several days. First flights on commercial plane, being so far away from home, going to a military camp, being in the mountains (7250 ft. elevation compared to about 3 ft. elevation here), and doing all of this with no one that he knows.
There are two ways (maybe more) to approach this. One way: all of this is new, unknown, and scary. Just try to make it through it. OR another way: all of this is new, unknown, and exciting. It's an adventure and let's see what's out there.
Hopefully Kendall, Amy and I will have the second approach.
BTW, he hasn't signed with the Air Force or anything like that. This is a fancy "look-see" with a lot of adventure involved. He is really interested in engineering and will be taking several seminars while 'out there'.
Posted by James Spaugh at 6:50 PM 1 comment:

One of our favorite things to do as a family is to play in the water. We love to swim and go boating on the river. As most people are, I am a creature of habit in that I enjoy doing the same things that I’ve done before.

However, over the last few summers, I have endeavored to learn a few new things to do while being pulled behind a boat in the river. I’ve learned to slalom ski (ski on one), wake board (not very good), and knee board.

Now for each of these, it was a tough deal for me to learn how to get up and stay on top of the water - much less look good doing it. So, this past Memorial Day, I decided that I wanted to learn to do a trick while knee boarding. Tricks usually mean pain for me. But, I was tired of doing the same ’ol thing. I wanted to do a 360 (turn all the way around). So, I’d try - and bust it. Try again, same result. I don't know how many times I tried, but each time I felt like I was getting closer.

Then came the moment of glory. I finally made it. It wasn't pretty, but those in the boat clapped and cheered for me. Here’s the crazy thing. I then proceeded to do the 360 trick seven more times without falling. It seems that once I did it, I then knew how. I finally had to let go because I was worn out.

That reminds me of the following God. Several times we fall, but we need to keep getting back up. That’s what Abraham, Moses, and David did. They weren’t perfect from the get go. Pretty far from it. They just kept getting back up and trying again. Each time they learned a little bit. Made some adjustments, and went at it again.

We need to do the same as we follow Christ. Here’s the cool part - Jesus will help us. We just have to ask. He won’t laugh at you like the folks did watching me bust it on the river. He’s pulling for you. Don’t be content with the same ‘ol. Seek to know Jesus better today than you did yesterday. May we connect people with God . . . and each other.
Posted by James Spaugh at 6:48 AM No comments: