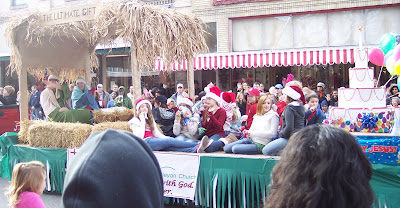 The first Saturday of December has been one of my favorite days each year for the past several years. It's the day of the Annual Christmas Parade in our town of Hertford. For years our church has built a float for the parade and had a bunch of folks to ride on it. This year was no different. We had a whole team of people spend a lot of time working on the float this year. We even won first place in the "Church Float" division at the parade. That's cool!

Along with the float, we have a table set up downtown - along the parade route - to give away hot chocolate and coffee to those waiting for the parade. The thing I like the best, is the look a lot of people give when they are told "It's Free!" Yesterday we got several of those looks. Even some "don't you take donations?" Nope.